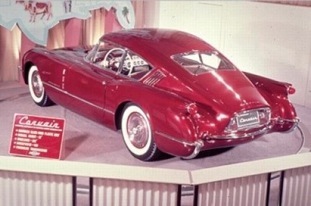 The 1954 Corvair's fastback styling with chopped off tail was influenced by European designs. In Europe, designers were more conceirned about aerodynamics than American designers were. Note the hood vents and front fender "gills", wich were both scrapped on the production Corvette. Like its siblings, the Corvair used the same front design, though it also sported ribbed air intakes on the hood that routed fresh air to the interior and fender vents that allowed heat to escape the engine compartment. In typical Corvette fashion, the Corvair also had a wraparound windshield, with nearly vertical A-pillars like the Nomad, but without the wing windows. The roof was aircraft-inspired, sweeping back and tapering gracefully, eventually ending at the chrome-trimmed license plate housing, which resembled a jet-fighter exhaust port. 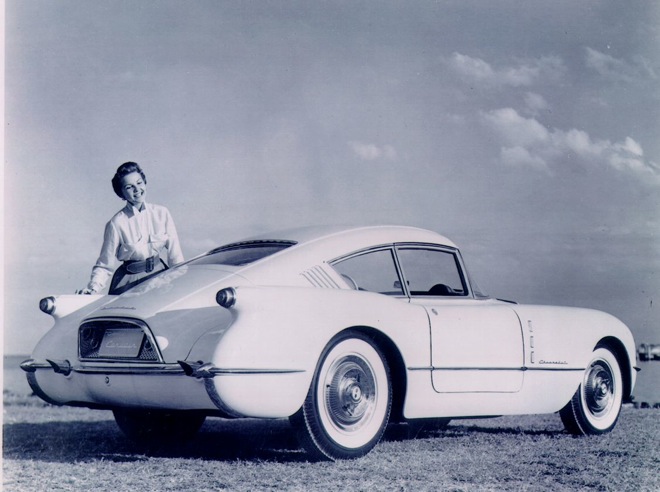 The roof was also interesting in a couple of other ways. First, it gave a glimpse of the quarter window and C-pillar treatment of the 1958 Chevrolet line, much like the Biscayne did a year later. Secondly, the addition of a fastback roof did not alter the Corvair's interior layout. One would have expected that it would have had a finished-off cargo area, perhaps even equipped with fitted luggage, as was a common practice with sports cars at the time. Instead, the body appeared to have the roof grafted right on to a production Corvette, as there is no storage area behind the seats. The stock trunk area is used with a decklid contoured to the new roofline. The seats had the production fiberglass divider between them, just like a stock Corvette roadster. The area is even body-colored, which actually makes for a very attractive, albeit unusual interior layout for a closed coupe. The remainder of the interior is largely stock, with custom white seat covers and chromed interior C-pillar trim pieces.

Unfortunately for this particular machine, it was the only one of the three that did not reach production in some form. With Corvette sales becoming sluggish during the 1954 model year, it was seen by product planners as too high a gamble. The time for a Corvette fastback eventually did come, though nearly a decade later and on a new-generation machine. 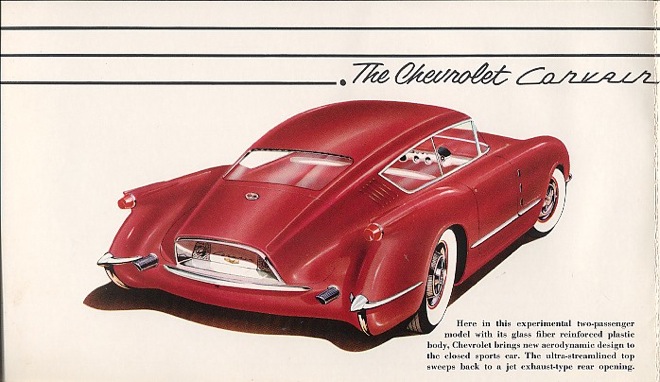