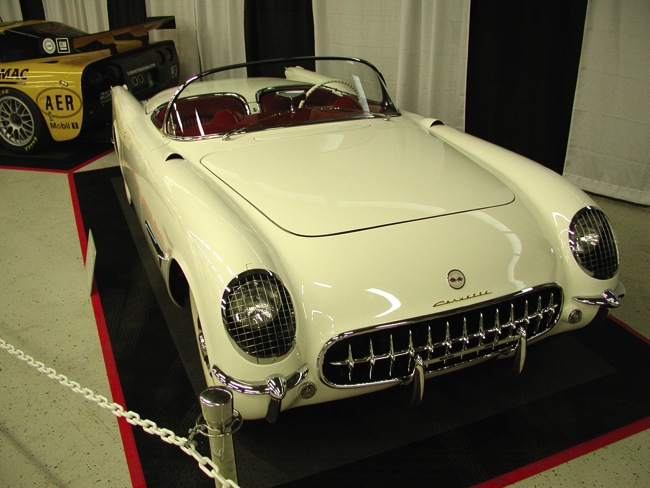 In 1952 the EX-122 concept car, which had been in development since 1951 and is the first of the hand-built Corvettes, is officially named “Corvette” after a type of fast warship. GM used the “EX” codes to name the EXperimental vehicles before they received a definitive name. Sports car aficionado and GM Vice President Harley Earl is the major force behind the design and development of the vehicle. Together with Bob McLean Earl formed a team that would be responsible for realizing the EX-122. On January 10, 1953, the Corvette concept car debuts at GM Motorama in New York City. The 1953 prototype had chrome script above the license plate frame with the name of the car. "Corvette" script also appeared above the front grille. Both scripts were removed on the actual production model. 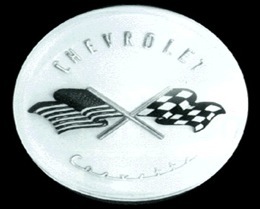 On January 12, 1953, just four days before the new Corvette's introduction at the Motorama on Januray 16th, the GM management team informed the styling team that the front emblem and the horn button containing the likeness of the American flag had to go. It just wasn't proper to have a country's flag in an automobile emblem not to mention being against the law! Overnight, new emblems were fabricated and installed on the Motorama car. When the first Corvette was shown to the press at the Motorama in New York City, the front emblems and horn button contained a black and white checkered flag and a red Chevrolet bow-tie and fleur-de-lis. 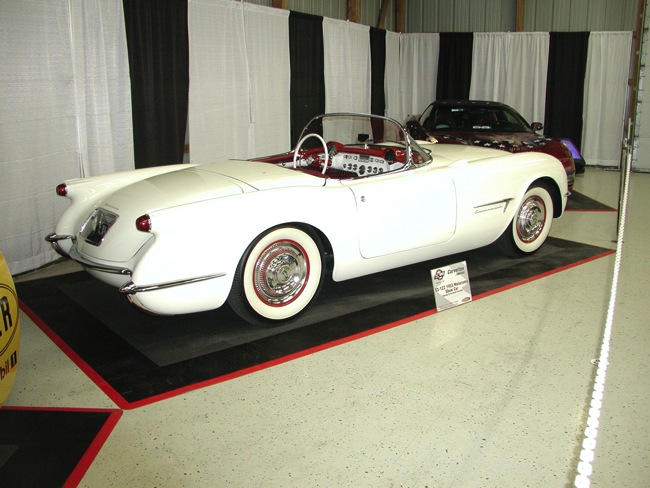 Project Opel featured a 46-piece fibreglass body, chosen to save weight, make tooling easier, and to allow the designers more freedom to create curves and rounded shapes. GM executives were initially unsure of this then-risky proposal for a mass-market car (fibreglass had, until then, been used only in very low-volume hand-built vehicles or 'specials'), but Earl and Cole were determined to push the concept through. The money men consented on the grounds that the car could effectively serve as a mobile testbed for glassfibre technology, which could then, if successful, be used in higher-volume, higher-profit large saloon cars. The budget for the project was limited, which meant that the team had to dig into the existing GM parts bin for the rest of the components and the engine, the well-proven 3.8-litre Chevy straight-six, which was modified to produce 150bhp at 4500 rpm, and paired with the Powerglide two-speed auto gearbox. Rear-wheel drive, the car rode on a simple leaf-sprung rear axle on a solid box-section frame. Its bodyshell may have been a radical departure for GM, but the powertrain and underpinnings certainly weren't. 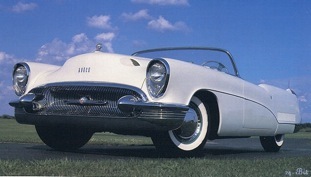 The 1953 Buick Wildcat was a design from the hands of Lauve for the 1953 Motorama. The ’53 Corvette has a lot of resemblance with this car, especially the positioning of the headlamps and grille. This Buick also had a fiberglass body. Nice detail were the “Roto Static” front hub caps that remain stationary while the wheels spin. 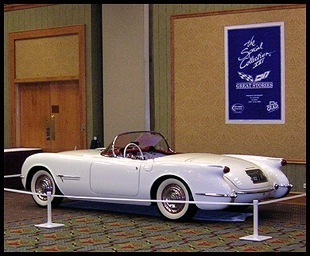 When Jack Ingle bought the car from Russell Sanders (by then director of Engineering & Sales of Rochester Division) in 1959, the car was re-bodied by Chevrolet with a 1955 body. This caused the disappearance of the original show-case features. Under the hood, the original Blue Flame was replaced with a 256ci V8. Russel Sanders' daughter had been driving the car for a couple of years after he bought it on April 11, 1956. Jack Ingle hold on to the car until somewhere in 2001, when the car was sold to Kerbeck Chevrolet. They started the job of restoring this car to it's original Motorama state.

Today, the EX-122 is still property of Kerbeck Corvette, the largest Corvette dealer in The United States. Click here to view the EX-122 part on their website, with lot's of info on this car.